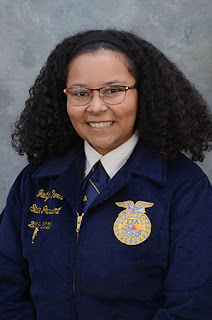 The Importance of the Original Roots of Agriculture" by State President, Jadyn' Durr

Christopher Columbus sailed the ocean blue in 1492. This is a phrase most Americans know. He did many things such as making four trips across the Atlantic, exploring the coast of what is now North and South America. But one of the big things he did was push Native Americans out of their land, seemingly erasing their towns, families, and their progress in agriculture. Today, we still see the Native American population as a minority in agriculture and the FFA. Recently, there has been an extremely big push towards diversity and inclusion within the FFA, but resources to help chapters achieve this goal are sparse. Personally, I was one of those people who continually ignored all that Native Americans offered to agriculture as I felt I had no place to speak for them. I was never involved in tribes that I have relations with, and I never took the step to understand what true native agriculture was. However as I continued to be involved in the FFA on a state and national level and after sitting through continuous workshops on diversity and inclusion, the same question popped into my head: how can we talk about inclusion when the topic of the original ‘American Farmer’ is still rarely mentioned?

I knew then that I wanted to find a way to talk about Native American agriculture, but unlike many others I did not want to advocate for something that I had no actual knowledge on. I was able to get in touch with Mackenzie Martinez, a Louisiana Choctaw Native.  Mackenzie, like most great FFA members, was incredibly involved. She grew up in a rural community where she raised chickens, turkeys, rabbits, and show pigs. She had a vegetable garden, and most everything she knew about agriculture was passed down from generation to generation. Yet unlike most of us, she grew up seeing and hearing prevalent problems facing Native American farmers. Mackenzie states, “Tribal farmers and ranchers face so many different obstacles because of their status as members of sovereign tribal nations. There are barriers to things like access to credit and lenders that won’t facilitate tribal members.”  The United States Government Accountability Office has created a report on the credit barriers Native American farmers face and how it affects them. Information provided by the Native Farm Bill Coalition gives us a glimpse of these issues, as well. The Coalition states, “Indian Country has been largely pushed to the margins of Farm Bill discussions for decades – which means that Native Americans and tribes are missing out on major opportunities to protect and advance their interests.” The Native Farm Bill Coalition website goes into great detail of how it is important that our native farmers have the support needed to thrive in the community.

Mackenzie also states, “There is also a need for more funding towards tribal colleges and universities that establish them as land grant institutions.” I, along with many others, did not know about land grant tribal universities, but in 1994, roughly 34 tribal colleges received land-grant institution status. This means they were allowed access to federal government resources that allowed them to become more self-sufficient. Yet, according to the American Council of Education’s review of tribal funding, many of these colleges have yet to see the funding they were promised. In some instances a tribal college or university (TCU) could be promised $8,000 per Indian student and only receive $6,000. Do not get me wrong, $6,000 is a lot of money, but for many of these TCUs that $2,000 difference means more than we will ever know.

With that being said the most important thing we can do is find ways to help out the cause. As FFA members or anyone involved in agriculture we have the power to use our platform to speak for those who may not be able to. Mackenzie especially harped on that fact. She states, “I think that non-native students can promote the story of traditional Native American agriculture by being aware and open-minded. When discussing students supporting one another in order to move forward in this space, the Louisiana FFA Association and even the National FFA Organization, if it hasn’t already, needs to take a stance on issues pertaining to cultural respect.”
The reason I joined the FFA and even ran for state office was to open up a discussion of diversity and inclusion that was not built on the basis of guilt but on the basis of understanding. I think the most important thing we can do as members is to make sure that everyone has their chance to be heard.

There was one thing that Mackenzie said that truly expressed the importance of representing Native Americans. “There are certain challenges to growing up on a reservation that many native youth face, and recognition in the FFA is an opportunity for them to develop into well-rounded individuals and implement that leadership into improving their communities.” When we look at the statistics, there are currently 165 Louisiana FFA members who self-reported Native American ethnicity,  meaning about 1.5% of our state’s membership is Native American. It’s not the biggest number, but it is a step in the right direction. We must also remember that numbers do not mean anything without something to show for it. We are awarded so many opportunities within the FFA, so why not work to ensure that everyone in the organization can share in those opportunities? Native Americans have been farming on this land longer than anyone knows, and they have so much to teach us about sustainable agriculture if we would just take the time to listen. It is time for us to take the initiative to understand their methods and traditions. My missions for all of you is to get in touch with a local tribe and truly pick their brains about what agriculture means to them. Find ways to get involved with their youth to understand the original roots of agriculture, and above all else, do what we were taught to do; represent our jacket with pride.

May the odds be ever in your favor,

Posted by Louisiana FFA Association at 7:42 AM